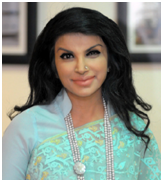 Bangladesh High Commissioner to the UK, Ireland and Liberia

& Permanent Representative of Bangladesh to the IMO

Ms. Saida Muna Tasneem arrived to London in November 2018 to take up her appointment as High Commissioner for Bangladesh to the Court of St. James's. she has taken up responsibility as Bangladesh High Commissioner to the UK, Ireland and Liberia on 30th November 2018. She has also been appointed as Bangladesh’s Permanent Representative to the IMO. Prior to this, Ms. Tasneem was the Bangladesh Ambassador to Thailand and Cambodia and Bangladesh’s Permanent Representative to the UNESCAP from 2014-2018. Back home, she headed the United Nations Wing  as well as the a Director General at the Ministry of Foreign Affairs from 2010-2014. She also served as DG (External Publicity) of the Ministry in 2009. Earlier Ms. Tasneem served as Minister (Political and Press) at the Bangladesh High Commission in London and as Deputy Head of Mission and Counsellor at the Bangladesh Permanent Mission to the United Nation in New York. Ms. Tasneem also served in different capacities in the Ministry of Foreign Affairs including in the UN, South Asia, SAARC, BIMSTEC, Administration, Middle East and Americas and the Pacific Wings. Ms Tasneem obtained her Bachelor degree BSC. (Engineering), Chemical Engineering  at the Bangladesh University of Engineering and Technology (BUET) and MSC (Public Policy and Management) from School of Oriental and African Studies, University of London

High Commissioner Tasneem has served as an expert in a number of National Committees on security issues including the National Defence Policy of Bangladesh drafting Committee, revision of Bangladesh's War Book, Member Secretary to the National Committee on UN Security Council Resolutions, National Task Force on repatriation of Myanmar Refugees, National Committee on Anti-money Laundering and Financing of Terrorism, National Task Force on Anti-money Laundering and repatriation and served as the Women in Development (WID) focal point for Ministry of Foreign Affairs. High Commissioner Tasneem specializes in countering terrorism and security issues, Women Empowerment, Climate Change and sustainable energy, migration and development, communications and public diplomacy. She takes special interest in issues relating to the Asian and the pacific.

High Commissioner Tasneem has been awarded the Atish Dipankar Peace Gold Medal in February 2017 for her contribution to enhancing interfaith harmony between Bangladesh and Thailand.  She has also received the prestigious Thai Red Cross Royal Decoration order second class from HRH Princess Siirindhorn of Thailand in November 2017 for her extraordinary l contribution to support philanthropic works.