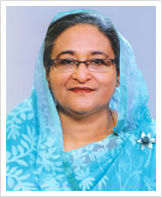 SHEIKH HASINA, Prime Minister of Bangladesh, was born on 28 September, 1947 at Tungipara under Gopalganj district. She is the eldest of five children of the Father of the Nation Bangabandhu Sheikh Mujibur Rahman, the founder of independent Bangladesh.

Father of the Nation Bangabandhu Sheikh Mujibur Rahman along with the members of his family was martyred on the fateful night of 15 August 1975. Sheikh Hasina and her younger sister Sheikh Rehana were the only survivors as they were in West Germany at that time. Later she went to the United Kingdom from where she started her movement against the autocratic rule in 1980. Sheikh Hasina was unanimously elected President of Bangladesh Awami League in 1981 in her absence, while she was forced to live in exile in New Delhi. Ending six years in exile, she returned home finally on 17 May 1981.

In the parliamentary election held in 1986, she won three seats. She was elected Leader of the Opposition. She led the historic mass movement in 1990 and announced the constitutional formula for peaceful transfer of power through Articles 51 and 56 of the Constitution.

Following the election of 1991 Sheikh Hasina became Leader of the Opposition in the country's Fifth Parliament, She steered all the political parties in the parliament towards changing the Presidential system into the Parliamentary one.

At the call of Sheikh Hasina a large number of people of all walks of life expressed solidarity with the movement at the 'Janatar Mancha'. In the Parliamentary election held on 12 June 1996, Bangladesh Awami League emerged as the majority party and she assumed the office of the Prime Minister of Bangladesh on 23 June 1996.

After becoming the Prime Minister, Sheikh Hasina adopted a number of pragmatic policies for overall development of the nation including poverty alleviation. During the last four years her government achieved laudable success including signing of the historic 30 year Ganges Water Sharing Treaty with India, signing of historic peace Accord on Chittagong Hill Tracts and inauguration of the Bangabandhu Bridge on the river Jamuna.

Sheikh Hasina has been awarded UNESCO's Houphouet-Boigny Peace Prize for 1998 for her remarkable contribution to bringing peace through ending the 25 years of conflict in Chittagong Hill Tracts with political courage and statesmanship.

Prime Minister Sheikh Hasina received prestigious Pearl S. Buck Award '99 on 9 April 2000 in recognition of her vision, courage, achievements in political, economic and humanitarian fields by Randolph Macon Women's College of USA. The UN Food and Agriculture Organization (FAO) has been awarded the prestigious CERES' medal to Prime Minister Sheikh Hasina in recognition to her fight against hunger on 02 August, 1999. The All India Peace Council awarded her 'Mother Teresa Award' in 1998. The Mahatma M K Gandhi Foundation of Oslo, Norway awarded Sheikh Hasina 'M K Gandhi Award' for 1998 for her contribution towards promotion of communal understanding, non violent religions harmony and growth of democracy at the level of grassroots in Bangladesh. Sheikh Hasina was named Paul Haris Fellow by the Rotary Foundation of Rotary International. She was also given Medal of Distinction in 1996-97 and 1998-99 and Head of State Medal in 1996-97 by the International Association of Lions Clubs.

She has authored several books including "Why Are They Street Children", "The Origin of Autocracy", 'Miles to Go", "Elimination of Poverty and Some Thoughts", "People and Democracy", "My Dream My Struggle" and "Development for the Masses." She performed holy Hajj and Umrah several times.

Sheikh Hasina is the Chairperson of "The Father of the Nation Bangabandhu Sheikh Mujibur Rahman Memorial Trust". She has been helping a lot of poor boys and girls for their education.

Prime Minister Sheikh Hasina, throughout her life has been a strong proponent of peace, freedom and democracy. From an early age, inspired by the lofty ideals and love for the people of her father, Bangabandhu Sheikh Mujibur Rahman, the liberator of Bangladesh, she developed a strong sense of identity for the common people. She always spoke out against oppression and violation of human rights. This commitment has hardened over the years, particularly when her parents, brothers and scores of relatives were brutally assassinated by the misguided members of the military in 1975 soon after the independence of Bangladesh.

Since that time her resolve for democracy and development for the teeming millions of Bangladesh has become firmly entrenched. She struggled for the return of democracy in Bangladesh and fought valiantly for its establishment in the country in every possible manner. She was committed to making Parliament the centre of all national activities.

In 1996, the people of Bangladesh gave her a strong mandate as the Prime Minister of the country. Despite serious resource and constraints and recurrent natural calamity as well as widespread poverty, Prime Minister Sheikh Hasina, during the first two years of her government, has lived up to her unswerving commitment to the cause of peace, democracy, development and human rights.

Her first act of peace within months of her assumption of office was the initiative for resolution of the long-standing water-sharing dispute with India through a 30-years treaty. This put an end to a very complex regional dispute.

Her visionary idea of a business summit among the political and private sector leaders of Bangladesh, India and Pakistan has added a new chapter in the history of South Asia.

Her dedicated leadership also made possible a peace agreement in the Chittagong Hill Tracts, thereby solving the 23-year old insurgency in the Hill districts of Bangladesh. This peace accord brought an area inhabited by nearly 5 million people out of violence and into a time of peace and development. Though the international media has not given much prominence to this accord, it is uniquely remarkable because the peace accord benefited such a large number of people and the whole area has been brought under development programs following the complete surrender of arms by the insurgents.

Her quest for peace has taken her to India and Pakistan to talk to the leaders of these two countries soon after the nuclear test urging reduction of tension in the region.

Prime Minister Hasina has been a strong advocate for the Culture of Peace at global, regional and national levels. In many major conferences, she espoused the concept of the Culture of Peace, most recently in South Africa at the 12th Summit of the Non-Aligned Movement (NAM) which has a membership of 114 countries. Her initiative has resulted in the first-ever resolution by the Plenary of the United Nations General Assembly on the Culture of Peace. She also provided leadership for the declaration by the UN of the period 2001 to 2010 as the International Decade for Culture of Peace and Non-Violence for the Children of the World.

Along with poverty eradication, she has focused on the empowerment of women and has successfully completed legislation to ensure adequate representation of women in the local government bodies, leading to the election of more than 14,000 women to these bodies in 1997. She has taken major initiatives to stop violence against women and children. She has also provided leadership in the field of education, particularly for the education of girls in her own country as well as advocating it for global support. Her government has greatly enhanced budgetary allocation for primary education focusing on girls' education.

To improve the quality of life of the people of Bangladesh, Prime Minister Sheikh Hasina has particularly focused on human development, paying special attention to healthcare, family planning, nutrition, women's rights and survival and development of children. At the UN and other forums, she has been a major voice in support of the cause of children and their rights.

Prime Minister Sheikh Hasina has, all along her life, defended human rights in every possible way. Her active promotion of the rights of women and children has drawn appreciation by both government and NGOs as well as international organizations. She has promoted the right to development as having centrality in the human rights regime. At the NAM Summit in South Africa in 1998, her proposal for a Convention on the Right to Development received welcoming endorsement of the Heads of State and Government. She initiated the establishment of a National Human Rights Commission and the office of Ombudsperson as well as Bangladesh's recent accession to six major human rights instruments including the International Covenant on Economic, Social and Cultural Rights.

Her keen interest resulted in the signature by Bangladesh of the Statute for the International Criminal Court (ICC) and ratification of the Landmines Treaty, being the first country in South Asia to do so.

Prime Minister Sheikh Hasina's initiative resulted in the hosting of the first-ever conference of the Asian parliamentarians devoted to peace and cooperation in Dhaka in September 1999 which elected her as the first President of the Association of Asian Parliaments for peace established at the conference.

At present, as someone who has lost so much personally and has been a victim of oppression and denial of freedom, Prime Minister Sheikh Hasina stands out as a messenger of peace, democracy, development and human rights. Her leadership of the eighth largest country of the world manifests her concern for the people, seen again during the worst-ever floods in Bangladesh in 1998.

• Sheikh Hasina is the recipient of the UNESCO Houphouet-Boigny Peace Prize for 1998 for her role in bringing peace in the Chittagong Hill Tracts region of Bangladesh.

• Sheikh Hasina has been awarded the Mahatma Gandhi Award for 1998 (Oslo, Norway) for her contribution towards promotion of communal understanding, non-violence, religious harmony and growth of grassroots democracy in Bangladesh.

• She has been awarded 1999 CERES Medal for contribution to the agriculture development by the Food and Agriculture Organization of the United Nations, Rome.

• She is the winner of the 1999 Pearl S. Buck Award for "your vision, your courage and your achievements in political, economic and humanitarian spheres capture the spirit of the award and of the woman who inspired it."

• She has been awarded honorary Doctor of Liberal Arts by the University of Alberta Dundee in the United Kingdom in October 1997.

• She has been conferred honorary Doctor of Laws by the Boston University in the United States and the Waseda University of Japan.

• She has been conferred the degree of Desikottama (Doctor of Literature) by the Visva-Bharati University, India founded by Nobel Laureate Rabindranath Tagore.

• She has been conferred honorary Doctor of Laws by the Australian National University in October 1999.

• Prime Minister Sheikh Hasina has been conferred honorary Doctor of Laws by Dhaka University in December 1999.

• She has been conferred honorary Doctor of Laws by the Catholic University of Brussels in February 2000.

• Prime Minister Sheikh Hasina has been conferred by the honorary Doctor of Humane Letters for her contribution to world peace and development by the University of Bridgeport, Connecticut in the United States on 5 September 2000

Under her leadership her party Bangladesh Awami League led grand alliance to win a landslide victory in the 9th Parliament Election on December 29, 2008 with 262 seats out of 299 in the National Parliament.

Sheikh Hasina took oath as Prime Minister of Bangladesh at a ceremony held at Banghabhaban on January 06, 2009.

Sheikh Hasina is married having one son and one daughter.